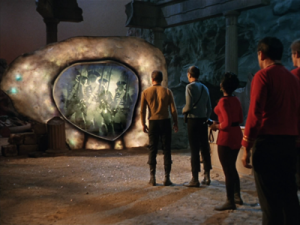 One of the best episodes of the TV series “Star Trek” is one called “The City On the Edge of Forever.”  Dr. McCoy gets an accidental overdose of drug that makes him mad.  He beams down to a planet with Kirk and Spock right behind him.  They arrive on the planet and stand in front of what seems like the largest TV I’ve ever seen.  McCoy, still in his drugged state, leaps into what is called the Guardian of Forever.  The minute he goes in, the landing party loses contact with the Enterprise.  We find out that McCoy has somehow changed history, causing the Enterprise to not exist.  Spock and Kirk enter the portal and find themselves in Depression-era America.  The two meet a young woman who works at a soup kitchen.  She is a peace activist that was supposed to die in a car accident.  However, McCoy saves her from getting hit by a car.  His one action caused a series of other actions that lead to the timeline radically changing.  Edith is able to lead a nationwide peace movement that keeps the United States out of World War II.  This allowed Nazi Germany to develop the atomic bomb and win the war.  To make a long story short, Kirk stops McCoy from saving Edith from the oncoming car.  Edith dies and the timeline is restored, but at a terrible cost.

In last week’s blog post, I talked about how faith is about doing something for God without knowing how the story ends.  This week’s passage in Hebrews has me thinking about how our actions have implications far beyond our own time.  The passage talks about how so many folks acted on faith and didn’t face happy endings.  They were faced with a choice and in faith decided to follow one road.  Because Abraham believed, a nation was born.  Because the Israelite believed, they could cross the Red Sea on dry land.  Choices were made that shaped our future.

What comes to mind for this coming Sunday is about how so many churches and religious agencies are facing tight budgets.  Many churches struggle to make ends meet.  Others end up closing.  It’s easy to look at our sanctuaries, which were once empty and are now barely occupied and wonder if God can work with our faith community.

The answer is yes.  The writer of Hebrews talks about a number of unnamed people who also heard the call of God and chose to step out in faith.  But as they say, there is always a downside:

I could go on and on, but I’ve run out of time. There are so many more—Gideon, Barak, Samson, Jephthah, David, Samuel, the prophets. . . . Through acts of faith, they toppled kingdoms, made justice work, took the promises for themselves. They were protected from lions, fires, and sword thrusts, turned disadvantage to advantage, won battles, routed alien armies. Women received their loved ones back from the dead. There were those who, under torture, refused to give in and go free, preferring something better: resurrection. Others braved abuse and whips, and, yes, chains and dungeons. We have stories of those who were stoned, sawed in two, murdered in cold blood; stories of vagrants wandering the earth in animal skins, homeless, friendless, powerless—the world didn’t deserve them!—making their way as best they could on the cruel edges of the world.

39-40 Not one of these people, even though their lives of faith were exemplary, got their hands on what was promised. God had a better plan for us: that their faith and our faith would come together to make one completed whole, their lives of faith not complete apart from ours.
Hebrews 11:32-40 (The Message)

The night before his assasination, Martin Luther King gave his “I’ve been to the Mountaintop” speech.  It’s an eerie forshadowing of what he was going to face hours later, but it also sums up what it means to have faith in God and our part in ushering in God’s kingdom.We all have a part to play, but we won’t always get to see the end of the story.  Here’s what he says towards the end of that speech:

And then I got to Memphis. And some began to say the threats, or talk about the threats that were out. What would happen to me from some of our sick white brothers? … Well, I don’t know what will happen now. We’ve got some difficult days ahead. But it doesn’t really matter with me now. Because I’ve been to the mountaintop. I don’t mind. Like anybody, I would like to live – a long life; longevity has its place. But I’m not concerned about that now. I just want to do God’s will. And He’s allowed me to go up to the mountain. And I’ve looked over. And I’ve seen the Promised Land. I may not get there with you. But I want you to know tonight, that we, as a people, will get to the Promised Land. So I’m happy, tonight. I’m not worried about anything. I’m not fearing any man. Mine eyes have seen the glory of the coming of the Lord.

King saw that he was part of something bigger than himself.  He knew that he was doing God’s work and he had the eyes of faith to see what the completed work would look like.

As followers of Jesus, we need to remind ourselves that our actions matter.  We might not see the ending, but we can know that we part of the great cloud of witnesses that will have an effect on people generations from now.

Go and be church.

I preached a sermon in 2010 based on the Hebrews text.  You can read it here.