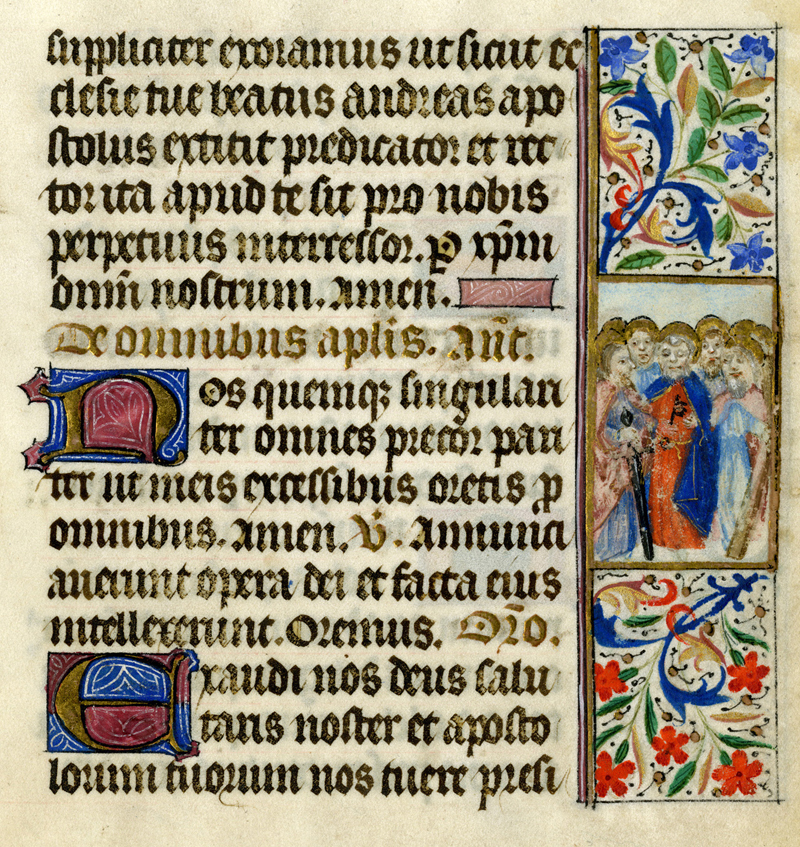 8 1 all the people gathered together into the square before the Water Gate. They told the scribe Ezra to bring the book of the law of Moses, which the Lord had given to Israel. 2 Accordingly, the priest Ezra brought the law before the assembly, both men and women and all who could hear with understanding. This was on the first day of the seventh month. 3 He read from it facing the square before the Water Gate from early morning until midday, in the presence of the men and the women and those who could understand; and the ears of all the people were attentive to the book of the law. 4 The scribe Ezra stood on a wooden platform that had been made for the purpose; and beside him stood Mattithiah, Shema, Anaiah, Uriah, Hilkiah, and Maaseiah on his right hand; and Pedaiah, Mishael, Malchijah, Hashum, Hash-baddanah, Zechariah, and Meshullam on his left hand. 5 And Ezra opened the book in the sight of all the people, for he was standing above all the people; and when he opened it, all the people stood up. 6 Then Ezra blessed the Lord, the great God, and all the people answered, “Amen, Amen,” lifting up their hands. Then they bowed their heads and worshiped the Lord with their faces to the ground. 7 Also Jeshua, Bani, Sherebiah, Jamin, Akkub, Shabbethai, Hodiah, Maaseiah, Kelita, Azariah, Jozabad, Hanan, Pelaiah, the Levites, helped the people to understand the law, while the people remained in their places. 8 So they read from the book, from the law of God, with interpretation. They gave the sense, so that the people understood the reading.

9 And Nehemiah, who was the governor, and Ezra the priest and scribe, and the Levites who taught the people said to all the people, “This day is holy to the Lord your God; do not mourn or weep.” For all the people wept when they heard the words of the law. 10 Then he said to them, “Go your way, eat the fat and drink sweet wine and send portions of them to those for whom nothing is prepared, for this day is holy to our Lord; and do not be grieved, for the joy of the Lord is your strength.”

The Nineteenth Psalm declares: “The law of the Lord is perfect, reviving the soul” (Ps. 19:7). On the Third Sunday of Epiphany, the first reading from Scripture comes to us from the book of Nehemiah. Nehemiah describes life in post-exilic Jerusalem. Nehemiah was a child of those members of the Jewish community who chose not to return to Jerusalem after Cyrus ended the exile in the sixth century BCE. Now, years later, we lean that Nehemiah was serving as a cup-bearer in the court of Artaxerxes (r. 465-525). While in this capacity, he learned of the situation of Jews living in Jerusalem and Judah. Things were looking bad, and Nehemiah grieved over this situation. Then, he asked his patron if he could go to Jerusalem and address the difficulties facing the people (Nehemiah 1-2). In other words, he was asking permission to rebuild the city of Jerusalem, including restoring its walls and gates. The exile had ended nearly a century earlier. A Temple had already been rebuilt, but the city was still largely in ruins. Nehemiah believed he could do something about the situation, and he received permission from the king. In fact, he was sent home with the title of governor.

The first reading for this third Sunday of Epiphany speaks of a ceremony in which the people gather to renew the covenant between the people and God. It occurs after the walls have been rebuilt. As the people gathered at the Water Gate, the people asked that Ezra, the priest, who according to the Book of Ezra had also received permission from Artaxerxes to return to Jerusalem (Ezra 7), read from the Book of the Law of Moses. So, the gathered people— “men and women and all who could hear with understanding”—listened intently as Ezra read from the “book of the law of Moses, which the Lord had given to Israel.” It is this law of the Lord that the Psalmist declares to be perfect. Therefore, on the first day of the seventh month, Ezra read from the book of the law. He began reading early in the morning and continued until midday. According to the story before us, “the ears of all the people were attentive to the book of the law.” For hours upon hours, the people listened attentively to the reading of the Word of the LORD.

The lectionary leaves out verse 4, which includes a listing of all those who stood with Ezra as he read the Word of the LORD to the people. This group of people served as witnesses to the message. For continuity sake, I have included the omitted verses, but have italicized them.

In verse 5 we have what looks like a repeat of what has already come to pass. Ezra is standing on the platform when he opens the book in front of the people. When he opens the Book of the Law, which is probably in the form of scrolls, everyone rises to their feet. There is a tradition in some churches to rise for the reading of Scripture. It is deemed to be a sign of respect and honor to the Word of God. I believe that at least some faith communities with this practice point to this event in the life of the people of Judah as precedent. This is again a reminder that what is taking place at the gate of the city is an act of worship, even as the people are engaged in renewing the covenant God had made with Moses. We’re told that when Ezra blessed the Lord, the people answered him by declaring “Amen, Amen” as they lifted their hands, bowed their heads, and worshipped God with their faces toward the ground. Yes, hearing the Word of the Lord read in community is an act of worship. It involved their voices and their bodies. As we hear this word, we might turn again to Psalm 19 where the Psalmist, declares that “the precepts of the Lord are right, rejoicing the heart” (Ps. 19:8).

Following this section of the story we encounter an omitted verse. Verse 7 of Nehemiah 8, like verse 4, includes a list of names. For readers of the Scripture these omissions are likely helpful. However, this omitted verse provides important information. We’re told that this group of people assisted Ezra in explaining the meaning of the Law. This is a good reminder that Scripture is not always self-interpreting nor is it so clear that anyone using common sense can read and understand what is being said. No, this verse reminds us of the importance of teachers of Scripture. This is reinforced by verse 8, which tells us that this group of assistants “gave the sense, so that the people understood the reading.” We might want to use our imagination here to envision the assistants going out into the crowd and gathering smaller groups so that interpretation can be given. With this word, the section beginning in verse 5 comes to a close.

The final section of the reading begins in verse 9. To this point, Ezra is the lead actor. He’s the own who reads the Law and offers initial instruction. Here in verse 9, Nehemiah, the governor, appears in the story for the first time. He joins Ezra and the Levites on the platform and adds his blessing to the event. Reading between the lines, it appears that as the people had begun to weep as the listened to the reading from the Law. Maybe they had begun to realize that they may have forgotten the core foundations of their faith. Now, perhaps for the first time, they are learning what the covenant entails. You might say that they felt convicted by the message.

It’s at this point that Nehemiah stepped up and began to speak. He told the people: “This day is holy to the LORD your God, do not mourn or weep.” This is not a time for sack cloth and ashes. This isn’t Ash Wednesday. This is Easter Sunday! So instead of weeping and mourning, go home and celebrate. Eat the fat and drink sweet wine. Have a party. If you have more than enough for yourself, share with your neighbor who is lacking in resources so they too can celebrate.

Picture Attribution: Nehemiah in the Liturgy from a book of hours, from Art in the Christian Tradition, a project of the Vanderbilt Divinity Library, Nashville, TN. http://diglib.library.vanderbilt.edu/act-imagelink.pl?RC=55356 [retrieved January 20, 2019]. Original source: