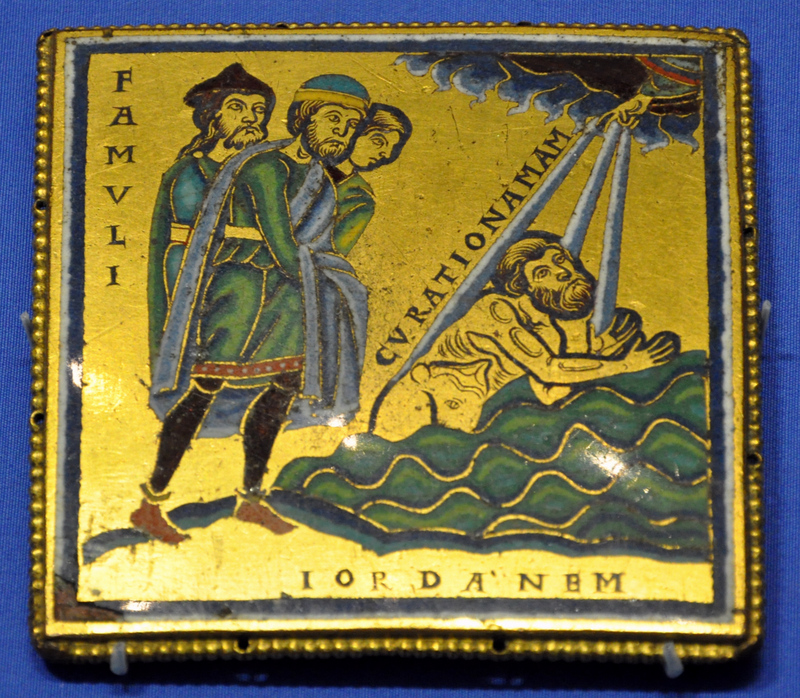 5 Naaman, commander of the army of the king of Aram, was a great man and in high favor with his master, because by him the Lord had given victory to Aram. The man, though a mighty warrior, suffered from leprosy. 2 Now the Arameans on one of their raids had taken a young girl captive from the land of Israel, and she served Naaman’s wife. 3 She said to her mistress, “If only my lord were with the prophet who is in Samaria! He would cure him of his leprosy.” 4 So Naaman went in and told his lord just what the girl from the land of Israel had said. 5 And the king of Aram said, “Go then, and I will send along a letter to the king of Israel.”

He went, taking with him ten talents of silver, six thousand shekels of gold, and ten sets of garments. 6 He brought the letter to the king of Israel, which read, “When this letter reaches you, know that I have sent to you my servant Naaman, that you may cure him of his leprosy.” 7 When the king of Israel read the letter, he tore his clothes and said, “Am I God, to give death or life, that this man sends word to me to cure a man of his leprosy? Just look and see how he is trying to pick a quarrel with me.”

8 But when Elisha the man of God heard that the king of Israel had torn his clothes, he sent a message to the king, “Why have you torn your clothes? Let him come to me, that he may learn that there is a prophet in Israel.” 9 So Naaman came with his horses and chariots, and halted at the entrance of Elisha’s house. 10 Elisha sent a messenger to him, saying, “Go, wash in the Jordan seven times, and your flesh shall be restored and you shall be clean.” 11 But Naaman became angry and went away, saying, “I thought that for me he would surely come out, and stand and call on the name of the Lord his God, and would wave his hand over the spot, and cure the leprosy! 12 Are not Abanaand Pharpar, the rivers of Damascus, better than all the waters of Israel? Could I not wash in them, and be clean?” He turned and went away in a rage. 13 But his servants approached and said to him, “Father, if the prophet had commanded you to do something difficult, would you not have done it? How much more, when all he said to you was, ‘Wash, and be clean’?” 14 So he went down and immersed himself seven times in the Jordan, according to the word of the man of God; his flesh was restored like the flesh of a young boy, and he was clean.

15 Then he returned to the man of God, he and all his company; he came and stood before him and said, “Now I know that there is no God in all the earth except in Israel; please accept a present from your servant.” 16 But he said, “As the Lord lives, whom I serve, I will accept nothing!” He urged him to accept, but he refused. 17 Then Naaman said, “If not, please let two mule-loads of earth be given to your servant; for your servant will no longer offer burnt offering or sacrifice to any god except the Lord.

So, at one level, if we continue on to the end of verse 17, we hear a word about the superiority of the God of Israel over the nations. It is a message that is found throughout the Hebrew Bible. Despite the smallness of the nation of Israel or Judah, despite its powerlessness in the face of its enemies, God is still in control. We may struggle with that image—it’s one that we who participate in interreligious conversations struggle with—but is also a reminder that God is not bound by national boundaries. It is also a reminder that God is concerned about the people of all nations, including a general from Aram, who has in his household a captive from Israel, who for whatever reason gets the ball rolling by informing her mistress that there is a prophet in Israel who can heal him of his disease. It is a word about humility—finding healing if one is willing to take a dip in a foreign body of water. It is also a word about a transformative experience of encountering the God of Israel.  And through this God is glorified.