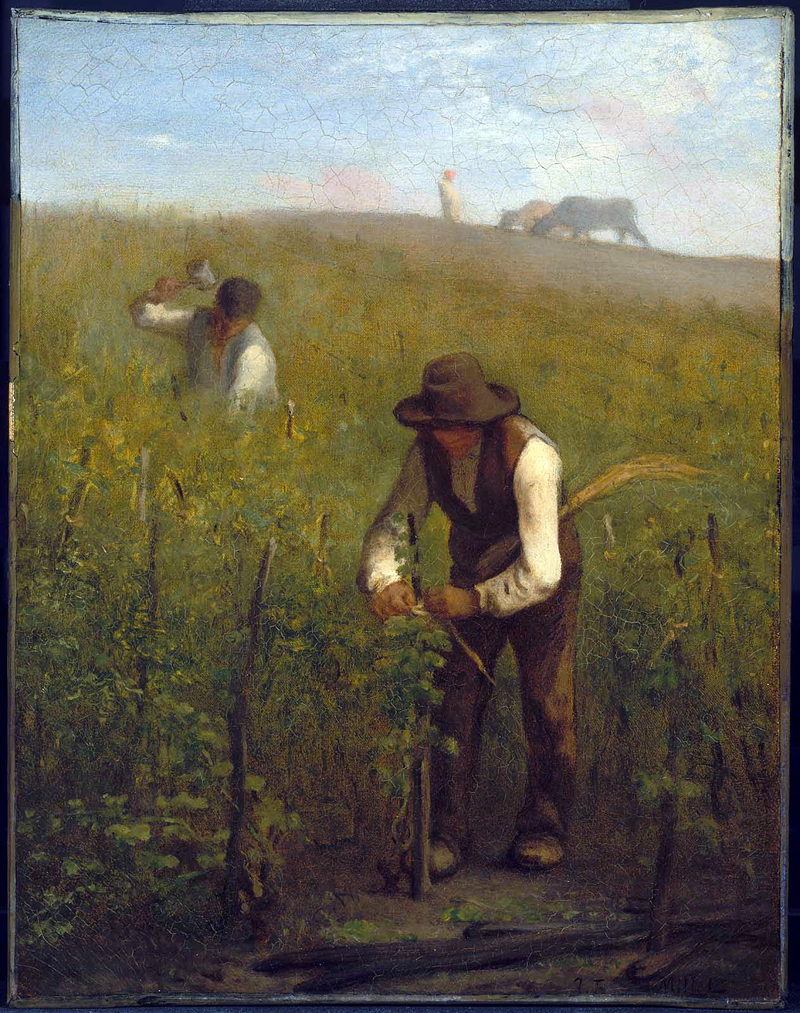 Isaiah 5:1-7 New Revised Standard Version (NRSV)
5 Let me sing for my beloved
my love-song concerning his vineyard:
My beloved had a vineyard
on a very fertile hill.
2 He dug it and cleared it of stones,
and planted it with choice vines;
he built a watchtower in the midst of it,
and hewed out a wine vat in it;
he expected it to yield grapes,
but it yielded wild grapes.
3 And now, inhabitants of Jerusalem
and people of Judah,
judge between me
and my vineyard.
4 What more was there to do for my vineyard
that I have not done in it?
When I expected it to yield grapes,
why did it yield wild grapes?
5 And now I will tell you
what I will do to my vineyard.
I will remove its hedge,
and it shall be devoured;
I will break down its wall,
and it shall be trampled down.
6 I will make it a waste;
it shall not be pruned or hoed,
and it shall be overgrown with briers and thorns;
I will also command the clouds
that they rain no rain upon it.
7 For the vineyard of the Lord of hosts
is the house of Israel,
and the people of Judah
are his pleasant planting;
he expected justice,
but saw bloodshed;
righteousness,
but heard a cry!
*****************

Isaiah wrote a love song about the vineyard God planted. God placed this vineyard in a fruitful spot; cleared it of stones and debris; made a winepress; planted grapes. What a sight it was to behold. God even put up a watchtower in the middle of the vineyard just so that an eye could be kept on it. Yes, God loved that vineyard, but things didn’t go as planned. That beloved vineyard produced wild grapes not suitable to make wine. The love song quickly turns into something of a lament. It moves from a song to a parable about Jerusalem, Judah, and Israel. It is a parable about a nation that was expected to be just and equitable, and yet it turned out to be filled with iniquity. God had great expectations, but were they met?

This is another oracle of the prophet Isaiah, who spoke for God primarily to the people of Judah in the eighth century BCE. His primary place of work was the southern kingdom of Judah, but Israel (the northern kingdom) was in his sights as well. After all, they were God’s people too! They were the wayward siblings, or so the people of Judah thought. Both would find the neighborhood to be a bit dangerous. They had bigger and more powerful neighbors like Assyria to the north and Egypt to the south. While the neighbors posed dangers, these two nations didn’t help themselves with their actions. In the previous reading from chapter1, we saw that God had become frustrated with the people, rejecting their sacrifices because they didn’t reflect the moral/ethical vision of God. The call given to the people was to cease doing evil and so that they might devote themselves to justice (Isaiah 1:10-20). The wording here is a bit different, but the concern remains the same. The people of Judah and Israel haven’t figured out what God expected of them. They didn’t seem to understand that God’s covenant with them required them to act justly. God had planted this vineyard and expected an appropriate return. We might call this allegiance or loyalty or obedience to the stipulations of the relationship. Here again, we discover that at the heart of those stipulations is a concern for justice. Unfortunately, it appears that the people haven’t been learning their lessons well, and so they’ll suffer the consequences.

As the passage moves from love song to parable, we hear the owner of the vineyard (God) ask Jerusalem and Judah to judge between the owner and vineyard. What should be done with the vineyard that’s not producing as expected? What would you do if a vineyard wasn’t producing the expected fruit? Would you follow the example laid out here by Isaiah? Would you pull down the fences in disgust and let the neighbors invade? After all, you did your best. You picked out good fertile land, prepared the soil, and planted the right vines. But nothing worked like it was supposed to work. If the vine wants to produce wild grapes, which apparently aren’t what is expected or desired, then why not let the wild grapes take over? That’s exactly what the owner does here. The owner of the vineyard pulls down the hedge and lets the neighbors trample over the beloved vineyard so that in the end it is left desolate. Is this not what the people wanted? Did they not prefer to be wild and sour?

If this is written by the one we call First Isaiah, then timing-wise, this is the era of the Assyrian advance that will threaten Judah (during the reign of Hezekiah) and destroy the northern kingdom of Israel. In the parable as told by Isaiah, the land will not be pruned or hoed. Instead, it will become “overgrown with briers and thistles” and the rains that are needed to water the vineyard will not fall. Robert Ratcliff summarizes the message here in this way:

In the story of the vineyard, Israel has in effect decided that it wants to produce wild, sour grapes. To achieve that goal, the vineyard need only revert to uncultivated ground. The actions God promises—removing the hedge, breaking down the wall, ceasing to hoe or prune—are just God’s way of seeing to it that Israel gets what it wants. The prophetic word assures that God will not save us from the consequences of our own folly; often this is judgment enough.  [Connections, Year C, Vol. 3, p. 236].

Verse 7 brings the parable to its climax. Here in verse 7, we find God’s indictment of Israel and Judah laid out. The indictment declares that God had “hoped for justice, but saw bloodshed.” The JPS translation has injustice rather than bloodshed (NRSV), but I think, either way, we get the point. That is, God wanted to see those wine grapes produce wine, but such is not to be. Why?  It is revealed here that the expectation was for justice, but injustice reigned. God desired equity, “but behold, iniquity” (Is. 5:7 Tanakh).

How might we hear this word from Isaiah? What word does it say to our communities in the face of gun violence, racism, mass incarceration, voter suppression, attacks on immigrants, religious intolerance? The list is long. For those of us who preach, the list can be wearying, as the reality of injustice seems ever on our minds. While we might wish that there is no cause for divine judgment, which we often think of in terms of fire and brimstone being flung from heaven, perhaps there’s a simpler answer. Could it be that God’s judgment on us is found simply in the fact that we suffer consequences of our choices? There are theological and philosophical arguments that can be made one way or another about God’s responsibility for things like natural calamities, but even there we may be implicated. Climate change, for instance, is contributing to natural disasters, and we have been contributing to these disasters by our own choices. So, if we choose a path of injustice, might not that choice catch up with us at some point? So, what does God expect of us? The answer seems clear enough. God expects justice from us. It is the key to the relationship. Worship is good and proper as we learned from Isaiah 1, but it begins in our interpersonal relationships.