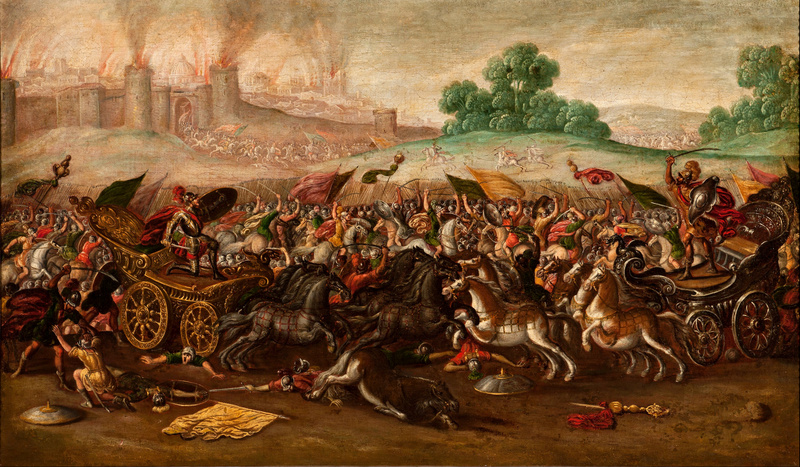 Lamentations 1:1-6 New Revised Standard Version(NRSV)
1 How lonely sits the city
that once was full of people!
How like a widow she has become,
she that was great among the nations!
She that was a princess among the provinces
has become a vassal.
2 She weeps bitterly in the night,
with tears on her cheeks;
among all her lovers
she has no one to comfort her;
all her friends have dealt treacherously with her,
they have become her enemies.
3 Judah has gone into exile with suffering
and hard servitude;
she lives now among the nations,
and finds no resting place;
her pursuers have all overtaken her
in the midst of her distress.
4 The roads to Zion mourn,
for no one comes to the festivals;
all her gates are desolate,
her priests groan;
her young girls grieve,
and her lot is bitter.
5 Her foes have become the masters,
her enemies prosper,
because the Lord has made her suffer
for the multitude of her transgressions;
her children have gone away,
captives before the foe.
6 From daughter Zion has departed
all her majesty.
Her princes have become like stags
that find no pasture;
they fled without strength
before the pursuer.
***********

My first thought when reading this took me back to my childhood visits to “Ghost Towns” like Virginia City, Nevada. All through the American West one will find “Ghost Towns,” towns that are now abandoned or largely abandoned that once thrived on Gold and Silver strikes. Virginia City today is a tourist site, but once it was a thriving metropolis with mansions, saloons, and even a couple of churches, serving a fairly large population. Other such towns haven’t had the same luck as Virginia City in becoming a tourist mecca, but the image seems appropriate. Jerusalem has become a Ghost Town. What was once a thriving city, full of people, commerce, and glory, is now abandoned.

The words that begin the Book of Lamentations, words that are traditionally attributed to the prophet Jeremiah, invite us to consider the fate of Jerusalem as it experienced destruction, desolation, and the exile of its leading people. It is unlikely that Jeremiah is the author (while it follows Jeremiah in the Christian canon, in the Hebrew Bible it is found in the third section, The Writings (Kethuvim). Most likely the poet/prophet who wrote these powerful words was reflecting on the exile of Judah and grieving the destruction of the city and state.

The book begins with the words “How lonely sits the city” (NRSV). In the Tanakh (JPS) the phrase is “Alas! Lonely sits the city.” That word “alas” might be more powerful than “how.” It carries a sense of grief and mourning. The tone is that of a sigh. Yes, “alas! Lonely sits the city.” Ron Allen and Clark Williamson note that the Hebrew eka “is frequently used in laments to signal a tragic change of circumstance from joy to sorrow.” [Preaching the Old Testament, p. 275]. With this opening word we get drawn into the grief of the moment. We might even begin to connect it with our own moments of tragedy and grief. Might we think of the events of September 11, 2001, and all that has followed? Is this not a moment where the word “alas” fits? Have we not experienced a fall from glory and a season of exile that seems unending? Do we not still sing the laments, liturgies of grief on anniversaries or as we ponder the unending wars in Afghanistan and Iraq, which likely spawned the war in Syria. “Alas! Lonely sits the city.”

In the words of the poet, Jerusalem is a princess who has become a widow who weeps bitterly in the night. Not only does she weep, but there is no one there to comfort her. All her lovers, her allies, have abandoned her. She is all alone in this city once filled with people. She feels betrayed by former friends who have betrayed her. In other words, her allies have turned against her and sided with her enemy—Babylon.

Now that she is in exile, living among the nations, finding no rest, with her pursuers overtaking here, she cries out in anguish. Indeed, we’re told that “Zion’s roads are in mourning, Empty of festival pilgrims; all her gates are deserted” [Lam. 1:4 Tanakh]. Allen and Williamson comment that the poet is reflecting here “an ancient Jewish view that nature itself was animated, ‘the roads to Zion mourn’ because the Temple is destroyed and people no longer come for the major religious observances.” Thus, “the priests groan not only because of the loss of vocation but because they depended upon the Temple offerings for food and livelihood.”  Even the young women grieve. [Allen and Williamson, p. 275]. It’s good to remember that Jerusalem was not only a political center—Judah’s capital—but it was a sacred site. It was the center of the universe, where God’s Temple could be found, and thus God could be encountered in tangible ways. All of this is now gone, and those who sing the lament do so wondering why. What sins had transpired that led to this situation where the sacred city is now ruled by its enemies. The answer must be that the Lord “has afflicted her for her many transgressions” (Lam. 1:5 Tanakh).

Our passage doesn’t end on a positive note. After all, this is a lament. It is meant to give voice to one’s grief, confusion, and possibly repentance. The future now lives in exile and its “young male rulers have become like stags without pasture, that is, without sources to sustain fullness of life and procreation (1:6)” [Allen and Williamson, p. 275]. We conclude with this sense that the future is uncertain at best. So, what do we make of our situation?

Laments like this are generally used in times of national crisis, and lectionary wise that situation might not always coincide. So, as we ponder the text, we might use this as an opportunity to reflect on grief and how we deal with it in personal and corporate ways. On the other hand, we may find ourselves in times where lament seems to be the appropriate response to the situation we find ourselves in. As I write this reflection, the United States has entered a period of uncertainty as the House of Representatives begins impeachment proceedings against the President. No matter how you feel about the President there is nothing about this situation that should give one glee. Indeed, this is a moment of lament for the nation. We might cry out that “gone from Fair Zion are all that were her glory.” The challenges of gun violence, whether mass shootings at schools and places of worship or simply random violence in cities and towns across the nation—these could give rise to laments. What of climate change and the continuing extinction of species? Yes, there is much to lament.

The lament begins: “How lonely sits the city that once was full of people! How like a widow she has become, she that was great among the nations!” My first thought upon reading these words was the ghost towns I visited as a youth—towns like Virginia City—but these are symbolic of other cities. We might see this word as an invitation to consider the way we process grief, and that would be a worthy effort. We can turn to Lamentations as an invitation to lament national tragedies, whether a mass shooting at a school or a shopping center or a moment of national despair when it seems as if our government is failing. These would be good, but the lament begins with a word about the city.

If my first thought was the ghost towns of my youth, my second thought when I read this was the great cities of this country that are struggling today, as well as the great cities of the world that are facing myriads of challenges, including the devastation of war. Think of Aleppo in Syria or Kabul in Afghanistan. Closer to home, I’m reminded of the challenges faced by the city of Detroit, a city that once had nearly two million residents and now has less than 700,000. It’s not a ghost town, but vast swathes of the city are abandoned. Detroit is not alone. Flint to the north has lost half its population. I think of my own hometown of Klamath Falls. The population has remained somewhat constant but the lumber mills are gone along with most of the major employers of my youth. I’ve not been back in over a dozen years, but everyone says it’s not the same. I hear the laments for once was a great city.

We ask why? Why has Detroit lost so many people? We know that one reason for Detroit’s slide was “white flight” that began in the late 1950s and picked up steam in the 1960s and 1970s. As the city declined, the suburbs flourished. Yet, we lament. The church I serve as pastor had its glory years in the city of Detroit, but like most predominantly white congregations in the city, it eventually followed its people to the suburbs, but not without a great deal of grief. Whether it is Detroit, Youngstown, Klamath Falls, or Aleppo, the laments continue. We ask why? Could it be as William McClain suggests: “When people are oppressed, desolation comes. Those who should be prospering have been betrayed by corrupt political systems and have become slaves of the very system that should give them hope. But God speaks to us in exile, and God has not abandoned the city. The city is the place where the temple of God has always been—the center of things, at the heart of the people.” [Preaching God’s Transforming Justice, p. 412].

How do we find hope in the lament? Although Jeremiah isn’t like the author of this lament, we might find a word of hope and purpose in Jeremiah’s word of guidance to the exiles in Babylon, whom he called upon to “seek the welfare of the city where I have sent you into exile, and pray to the Lord on its behalf, for in its welfare you will find your welfare” (Jer. 29:7). Thus, William McClain writes:

When we begin to understand that our future is tied to the future of the city, we will welcome the strangers (foreigners, visitors) and invite them to gather with us around a common table, a community bound by a common Creator, Redeemer, and Host! And the table will be the “Welcome Table” that my grandmother believed in and sang about. In these in-between times, it is a table where all of God’s children can gather around in one Communion, at a common earthly meal aw a rehearsal for the eschatological banquet. [Preaching God’s Transforming Justice, pp. 412-413].

It is good and right to grieve what has been lost, but it is also important to embrace the present and future by praying for the city and thus gather together at the welcome table of restoration.