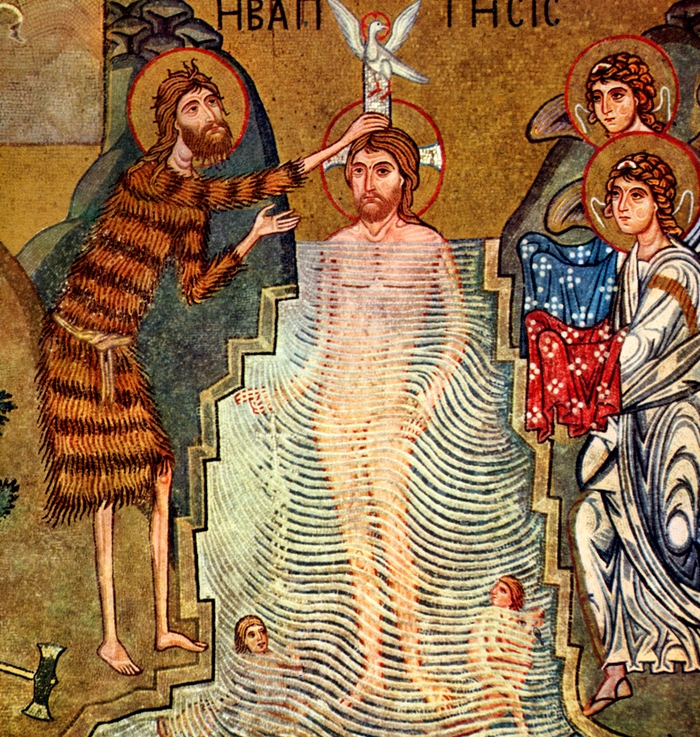 34 Then Peter began to speak to them: “I truly understand that God shows no partiality, 35 but in every nation anyone who fears him and does what is right is acceptable to him. 36 You know the message he sent to the people of Israel, preaching peace by Jesus Christ—he is Lord of all. 37 That message spread throughout Judea, beginning in Galilee after the baptism that John announced: 38 how God anointed Jesus of Nazareth with the Holy Spirit and with power; how he went about doing good and healing all who were oppressed by the devil, for God was with him. 39 We are witnesses to all that he did both in Judea and in Jerusalem. They put him to death by hanging him on a tree; 40 but God raised him on the third day and allowed him to appear, 41 not to all the people but to us who were chosen by God as witnesses, and who ate and drank with him after he rose from the dead. 42 He commanded us to preach to the people and to testify that he is the one ordained by God as judge of the living and the dead. 43 All the prophets testify about him that everyone who believes in him receives forgiveness of sins through his name.”

Christmas and Epiphany have come and gone. It’s time for the story of Jesus’ birth and childhood to give way to the beginning of his ministry. On this first Sunday after Epiphany, we celebrate the baptism of Jesus. This baptismal event at the hands of John, which took place in the Jordan, marks the point at which God claimed Jesus as beloved Son. With that, after spending time in the wilderness, Jesus began his earthly ministry. As Matthew, and other Gospels, tell it, at the moment of his baptism the heavens opened, and God claimed him as God’s Son, the beloved (Mt. 3:13-17). Baptism of Jesus Sunday often serves as an opportunity for modern followers of Jesus to reaffirm their baptismal vows and renew their vision of ministry.

If the Gospel reading from Matthew 3 invites us to join Jesus at the Jordan, the Second Reading, which normally is drawn from one of the epistles, takes us to the Book of Acts. Contextually, we find ourselves at the home of Cornelius, a Gentile Centurion, who has summoned Peter to share with the household something about Jesus. At this point in the story, as told in the book of Acts, Peter’s focus has been on the ministry to those Jews who might be open to the message of Jesus, although the ministry of Philip had opened the mission to the Samaritans. But things are about to change because Peter has discerned through a vision that God might be opening the circle a little wider. Maybe, that circle could be drawn to include not only Jews and Samaritans but Gentiles as well. The connecting tissue linking this reading from Acts 10 to the aforementioned baptism of Jesus, is the reference to God anointing Jesus, perhaps through the aforementioned baptism of John, “with the Holy Spirit and with power.” As the reading for today speaks of John’s Baptism and suggests that Jesus might have experienced that baptism, we have another element of background information to interpret this passage and the message Peter wants to deliver to Cornelius’ household. Since this is a Sunday in which so many reaffirm their baptisms, it’s appropriate to note that before Peter gets too far into his sermon the Spirit falls on Cornelius and his household, which leads Peter to decide that there is nothing stopping them from being baptized themselves.

In this excerpt from the longer story that takes up chapters 10 and 11 of the Book of Acts, Peter’s gospel preaching begins with Jesus’ anointing with the Holy Spirit in the aftermath of John’s baptism. He notes that Jesus traveled the countryside doing good things, including offering to heal to those oppressed by the devil (exorcism). He notes that he was a witness to all that Jesus said and did, including his death and resurrection. He also notes that God appointed Jesus to the position of judge over the living and the dead. All of this took place as revealed by the prophets, so that “everyone who believes in him receives forgiveness of sins through his name” (Acts 10:43 CEB). As for Peter, he was a witness to all of this.

While Luke records Peter’s stump speech, what stands out is Peter’s declaration that he has learned that God doesn’t show partiality to any one group of people. We need to be careful here so that we don’t take an anti-Jewish step. This could involve the suggestion that Jews are Christ-killers (“they hung him on a tree”). We also need to be careful not to suggest that what Peter is doing here offers Jesus as a replacement for Judaism. Peter is saying, however, that while God may have chosen Israel and continues to treasure Israel, God ultimately shows no partiality to any specific group. This may seem contradictory, but I think God can hold things into tension. The message that Peter heard in his vision and he shares now is that in Christ all are welcome. God may have chosen Israel, but that doesn’t exclude Gentiles from enjoying the blessings of God’s realm.

If we can remove any possible taint of anti-Semitism from this statement, then we get to what I think is the core message here, and that is God welcomes everyone into the family. The criteria we often use to exclude have no standing here. In the case of Cornelius, Peter may have in mind his Gentile status. He might also have been concerned about Cornelius’ military career. But, apparently, none of this matters to God.

Now, this moment has been coming for some time. It would seem to be rooted in the call to take the Gospel to the ends of the earth (Acts 1:8). That could have been simply a call to minister to the diaspora, but even the Gospel of Luke there are hints that Jesus has other things in mind. Eventually, Paul’s mission to the Gentiles will take center stage, but not quite yet. It’s actually Peter who gets the first honor of breaking down the wall of separation. Again, we need to be careful not to cast Jews in a negative light. There were degrees of welcome in Judaism of the first century and earlier, just as there have been degrees of welcome within the Christian community toward those who have lived outside the circle.

The context for hearing this message is the celebration of the baptism of Jesus, which inaugurates his ministry. The context of the passage is a different baptism, but one that marks a transitional moment in the life of the church. Paul will be the lead person in the Gentile mission, but Peter is the one who takes the first step. That’s appropriate. He was, it seems, Jesus’ closest companion. He was the leader of the church. Whatever decision he made in a situation like this set the parameters for what would come later.

The sermon he preaches to Cornelius’ household occurs only because Peter had already experienced conversion through the vision in which God reminded him that he should not declare unclean what God had declared clean. Now that part of the story isn’t mentioned here, but it’s the context. We wouldn’t be here without that vision.

So, what does Peter’s declaration that God shows no partiality mean for the 21st-century Christian community? After all, our churches remain largely segregated according to ethnicity/race. Some of this is cultural and some of it has to do with comfort level. But it also to do with the fact that many of us in the White Christian community has not yet made peace with our complicity in the suppression/oppression of minority communities. Then there is the church’s relationship to those who make up the LBTQ community, which itself is not monolithic. The church as a whole has been largely hostile to this community, to everyone’s detriment. The story that we find in Acts 10 and 11 has proven to be an important piece in my own journey to welcoming fully my LGBTQ brothers and sisters. The Spirit moves as the Spirit moves!

Regarding the question of Partiality, I appreciate this word from Matthew Skinner:

A God who “shows no partiality” is not politically neutral or aloof; the expression in this context indicates God’s active concern for all humanity. Peter would have already known this from Jewish scriptural traditions, but he sees it coming to pass now in an unexpected way, with old boundaries passing away and new solidarity and fellowship springing into being, sealed by the Holy Spirit. If God shows this kind of impartiality, so should God’s people. [Connections, Kindle Edition].

Boundaries are difficult to let go of, but as Peter discovered in his encounter with Cornelius, it’s possible. It’s just a matter of flowing with the Spirit. So, what about our boundaries and barriers? What needs to go so that God’s inclusive love might be made known to the world? Since this is Baptism of Jesus Sunday, how does such a concern relate to our understanding of baptism?