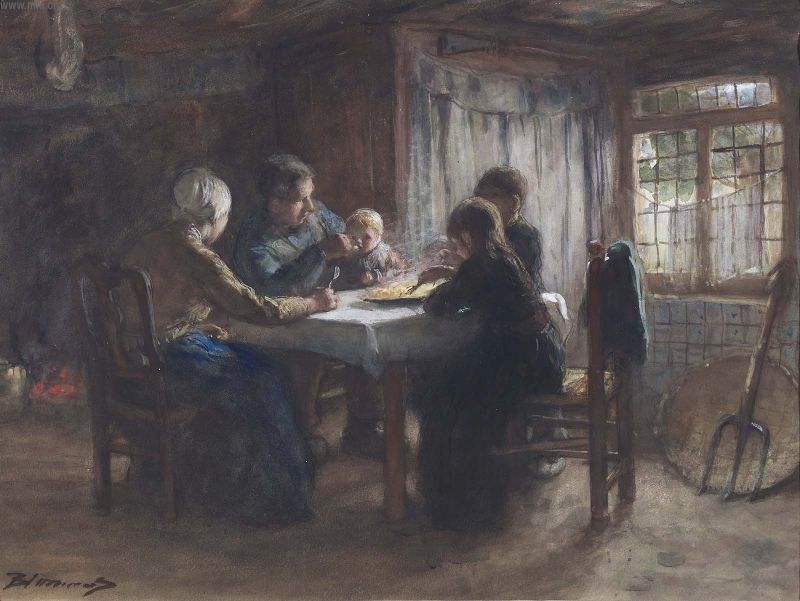 3 And so, brothers and sisters, I could not speak to you as spiritual people, but rather as people of the flesh, as infants in Christ. 2 I fed you with milk, not solid food, for you were not ready for solid food. Even now you are still not ready, 3 for you are still of the flesh. For as long as there is jealousy and quarreling among you, are you not of the flesh, and behaving according to human inclinations? 4 For when one says, “I belong to Paul,” and another, “I belong to Apollos,” are you not merely human?

5 What then is Apollos? What is Paul? Servants through whom you came to believe, as the Lord assigned to each. 6 I planted, Apollos watered, but God gave the growth. 7 So neither the one who plants nor the one who waters is anything, but only God who gives the growth. 8 The one who plants and the one who waters have a common purpose, and each will receive wages according to the labor of each. 9 For we are God’s servants, working together; you are God’s field, God’s building.

When a child is born, they are given milk at first (whether a mother’s milk or formula). Later, pureed foods are added. Finally, when their systems are ready, and teeth have arrived they will be introduced to solid food. You can’t introduce solid food until a child has the ability to chew. What is true for a human child is true for us as spiritual children. You don’t hand a volume of Barth’s Church Dogmatics or Elizabeth Johnson’s She Who Is to a new believer. You might want to give them something more easily digested. As we see in this third chapter of 1 Corinthians, Paul has concluded that the Corinthians aren’t quite ready to move on to solid food. They’re still infants needing to be fed a more appropriate diet. Paul comes to this conclusion as he deals with the vexing problem of divisions within the congregation. The quarreling and jealousy that is present in the congregation is evidence that they remain infants in Christ. They’re not ready to receive the deeper truths Paul would like to share with them. They don’t have any spiritual teeth with which to chew this food.

In this chapter, the nature of the divisions introduced in chapter one seems to become clearer in chapter three. We know that there is a party spirit present in the congregation. Paul had mentioned in chapter 1 that some were claiming to follow Apollos, others Cephas, some Paul, and some simply identified with Jesus. Or perhaps the division is a bit narrower. Perhaps it centers on partisans for Paul and partisans for Apollos. Whatever the nature of this division, Paul refers to it as an expression of the flesh. When Paul refers to the flesh here, he doesn’t have the body in mind. His is a very embodied theology, so what he has in mind here is a sinful predisposition that has its grip on this congregation. To say that the congregation is divided over their loyalty to Paul or Apollos, doesn’t mean that either man intended for this to happen. Nevertheless, the Corinthians, being spiritual infants who are not ready for solid food, have fallen into this trap that is so common in our world. Just look at the way politics often works, especially right now.

Regarding the person known as Apollos, the only place besides 1 Corinthians that he’s mentioned in any detail is the Book of Acts (he is mentioned in Titus 3:13, where he appears to have been in Crete and may have served as a courier for the letter to Titus). According to the Book of Acts, Apollos arrived in Corinth around the time that Paul was leaving the city. He had come from Ephesus, which was where Paul was heading. In Ephesus, he had met Priscilla and Aquila, who instructed him more fully in “the Way.” It is said there that he had some knowledge of Jesus but had experienced only the Baptism of John. It would seem that Priscilla and Aquila gave him his graduate education in the Christian faith possibly baptized him before he left for Greece, where he ended up in Corinth (Acts 18:24-19:1). We’re told he was well-educated, probably in the art of rhetoric. Thus, he was an effective teacher of the faith. When he arrived in Corinth, it seems that Apollos, being an effective speaker and having the appropriate instruction, became part of the leadership in the Corinthian church. Perhaps there were those who embraced him at the expense of Paul, the founder of the church in Corinth.

I’m wondering, though I can’t prove it, whether Apollos had attempted to introduce the congregation to “solid food” before they were ready. Sometimes, immediately after finishing seminary, new pastors, flush with knowledge want to share what they know with their congregation. Some in the congregation might have been ready for it but were impressed by his erudition. Could it be that they were excited about receiving “deeper knowledge” than what Paul had shared with them?

If we read between the lines, it seems that Apollos was a much more impressive figure than Paul. If he was a rhetorician, he knew how to communicate effectively. He probably sounded a lot like the teachers that populated the town square. His message might have been different from theirs, but he might have shared their eloquence. So, it’s no wonder that he developed a following in Corinth. However, not everyone was as impressed. There were those who preferred Paul’s message. After all, he was the founding pastor. He had laid the groundwork. When Paul heard all this he wanted to straighten things out. He wanted to make it clear that this wasn’t about Apollos or him. Both had their place, but ultimately this was about God. Or, as Paul puts it here, switching metaphors from babies to agriculture, he had planted the seeds that Apollos watered, but ultimately God is the one who brings the growth.

What happened in Corinth is not a unique occurrence. History is filled with examples of division, quarreling, and jealousy. As a preacher, I’ve experienced I’ve known jealousy! So, I know what Paul is talking about.

The causes of division are many. They could be rooted in theological differences, but quite often what looks like a theological issue is really a personal one. Sometimes the messenger’s personality gets in the way of an effective conversation. It’s been suggested that the Nestorian controversy was rooted as much in Nestorius’ gruff personality as it was his theological views. We know that Cyril of Alexandria was a brilliant theologian, but he got himself caught up in some rather distasteful and violent affairs that shook the Alexandrian church during his tenure. The Donatist controversy wasn’t so much about theology as it was cultural differences. My own denomination is part of a larger movement that had as one of its reasons for existing the pursuit of Christian unity, and yet we’ve divided several times. Some elements of this division might be theological, but not all of them. As in Corinth, it probably involves a lot of fleshiness.

It’s worth remembering that the Corinthian church probably wasn’t much more than five years old. It was populated largely by converts. Even Apollos hadn’t been at this very long. So, it probably shouldn’t surprise us that this congregation might be experiencing growing pains. Can the same be said for the church today? After all, we’ve been at it for nearly two thousand years. Yet, the flesh is still with us. We are still captive to the ways of the world. Division is common. Fear is common, and it can lead, as it seems to be doing today, to circling the wagons. There are attempts to protect privileges that are rooted not in the teachings of Jesus, but human sinfulness.

The question is, are we ready for some solid food?  In other words, are ready to take up our calling to be God’s servants who work together in God’s field (or building)? Or do we still require spiritual formula?