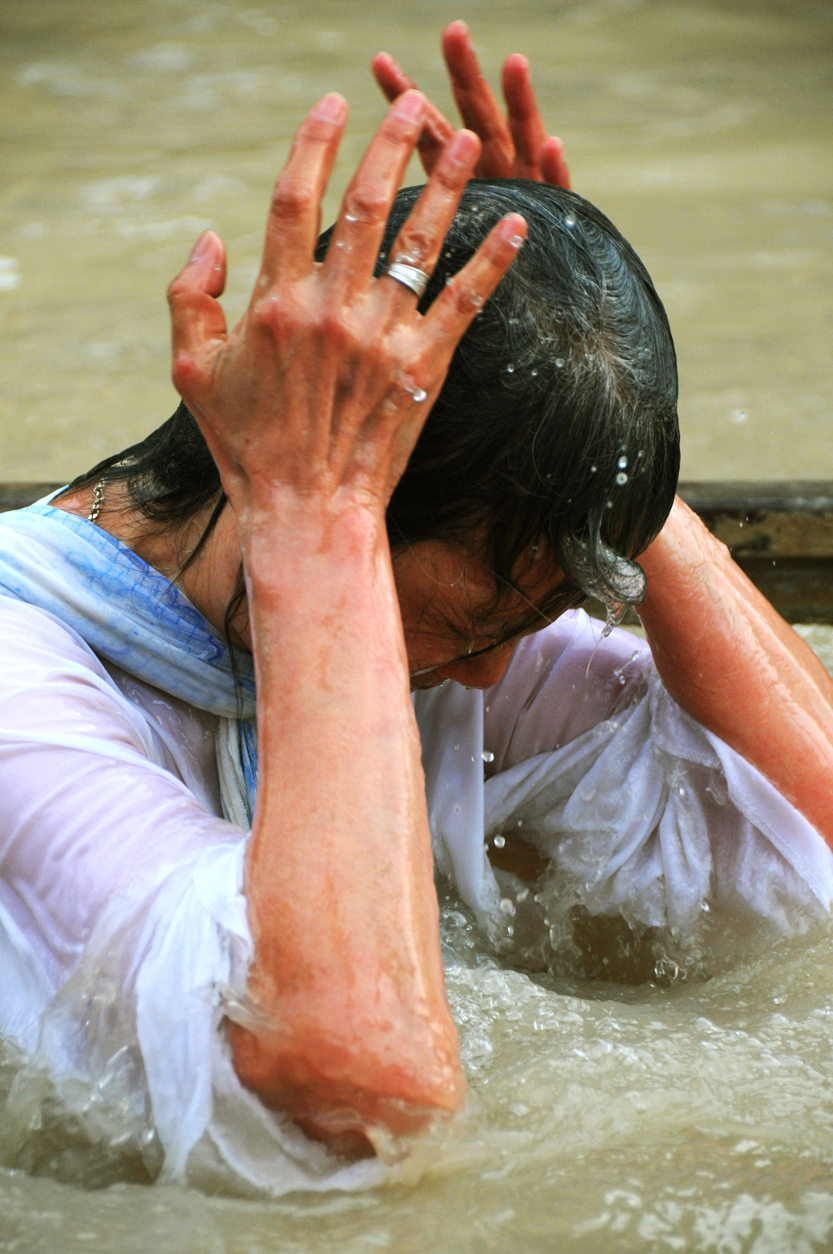 6 What then are we to say? Should we continue in sin in order that grace may abound? 2 By no means! How can we who died to sin go on living in it? 3 Do you not know that all of us who have been baptized into Christ Jesus were baptized into his death? 4 Therefore we have been buried with him by baptism into death, so that, just as Christ was raised from the dead by the glory of the Father, so we too might walk in newness of life.

5 For if we have been united with him in a death like his, we will certainly be united with him in a resurrection like his. 6 We know that our old self was crucified with him so that the body of sin might be destroyed, and we might no longer be enslaved to sin. 7 For whoever has died is freed from sin. 8 But if we have died with Christ, we believe that we will also live with him. 9 We know that Christ, being raised from the dead, will never die again; death no longer has dominion over him. 10 The death he died, he died to sin, once for all; but the life he lives, he lives to God. 11 So you also must consider yourselves dead to sin and alive to God in Christ Jesus.

When I play Monopoly it’s always helpful to obtain at some point a “Get Out of Jail Free” card. You never know when you’ll need it. When it comes to spiritual things, sometimes we treat grace similarly. Maybe you’ve seen the bumper sticker: “I’m not perfect, just forgiven.” That may be true, but it’s a sentiment easily abused (usually by the person driving the car, who cuts you off almost causing an accident). That’s why Paul told the Corinthians that while all things are lawful, not all things are beneficial (1 Cor. 6:14). Here in Paul’s letter to the Romans, we read about the power of sin and the power of grace. Paul makes it clear that we have been justified by faith through the grace obtained through the death of Jesus. Death, Paul writes in Romans 5, came to humanity through sin, but life comes through Christ, who overcomes sin through his own death. But if grace is so powerful that it overcomes death, why not sin all the more so that grace has an opportunity to work its magic in our lives. As Luther declared: “sin boldly” (I don’t think Luther had libertinism here, though).

Grace is not, in Paul’s mind, a license to sin. It is instead an invitation to restart our lives by moving from one realm (sin) into another (grace). Paul isn’t naïve. He understands the power of sin to gain dominion over our lives. He may not have used the term systemic in relation to sin, but he understood that sin was a power that was present in the broader culture/society. Think here of racism. Why is it so prevalent in our society? Why do we find it so difficult to break free of its hold? If it was just a knowledge thing, we could break free so easily, but it runs so much deeper than that. To be in Christ means dying to that old realm where a system, like racism, continues to reign. Grace is the starting point, but it’s not the endpoint. So, to be in Christ means dying to the old realm and being resurrected into a new life that is under the dominion of Christ. Of course, if we open the door to let it sin back in, it will make its home in our lives once again. So, no, we should sin so that grace might have greater opportunity to display itself.

This leads us to baptism as that point wherein we die to sin and are raised to new life in Christ. It is the point at which we exchange allegiances. As Sarah Heaner Lancaster notes: “Exchanging one dominion for another requires a change of allegiances. To continue in sin would show that one has not changed allegiances” [Lancaster, Romans, p. 107]. In other words, to rise to new life in Christ means that you can’t live as you once did. That old life marked by sin, by rebellion against God’s rule, has been left behind.

This change of identity is embodied in the practice of believer baptism by immersion. By being buried in the waters of baptism, we die to the old life. As we rise from the waters of baptism, we leave the old life behind. In the ancient church, baptism followed a lengthy period of teaching (Hippolytus in his Apostolic Tradition spoke of a three-year process), after which one was baptized. In those services, in which one often stripped off one’s old clothes before entering the baptismal pool, one would be asked to renounce Satan, before being buried in the waters of baptism and then given new clothes upon the exit from the baptistry. Our processes are not nearly as intensive as was true in the early years of the church, but the imagery remains powerful. In baptism we are buried with Christ, leaving behind the old life of sin, before being raised to new life, again with Christ, so that we might share in his resurrection.

We can’t sin so that grace might abound because if we’ve been baptized into Christ, we have died to sin and raised to new life. Therefore, neither sin nor death has dominion over our lives. Yet, we know, that in real life sin keeps tugging at us. It’s why churches often provide prayers of confession. It seems we need to die to sin anew each day. I know this is true of my own life. In part, this is because even if I have given allegiance to Christ in baptism, I still live in this world where sin rules. Karl Barth recognizes this challenge to our continued engagement with sin. He writes that “because and so long as I live in the body, I remain the old man, and am wholly and indissolubly one with him. Therefore the death of the old man and dissolution of my identity with him also involves the doing away of my union with this body. As the new man, I live no longer in it: as determined by time and things and men, I exist no longer” [Barth, Romans, p. 199]. We may have changed our allegiance, but as long as we experience this body of ours, we will be subject to sin. We can move toward that new life, as we change our allegiance, but truth be told, we will continue to wrestle with sin. We might not be as beholden as we were in the past, but it’s still there. The difference, is we struggle with sin, but no longer do we live in bondage to it.

To quote another bumper sticker that is also easily abused, “please be patient, God isn’t finished with me yet.” That is true. Sanctification is a process, a movement toward the full embodiment of God’s grace. That being said, imperfection is not an excuse for sin, including racism and homophobia. In the end, we are called to consider ourselves dead to sin and alive to God in Christ. Thus, if we live by faith, then as Barth notes: “faith means seeing what God sees, knowing what God knows, reckoning as God reckons” (Romans, p. 206). This is the new life in Christ.


Image attribution:  Baptism in the River Jordan during pilgrimage, from Art in the Christian Tradition, a project of the Vanderbilt Divinity Library, Nashville, TN. http://diglib.library.vanderbilt.edu/act-imagelink.pl?RC=55206 [retrieved June 14, 2020]. Original source: http://commons.wikimedia.org/wiki/File:Flickr_-_Israel_Defense_Forces_-_Christian_Pilgrims_Celebrate_the_Epiphany_in_the_Jordan_Valley,_Jan_2011_(1).jpg.