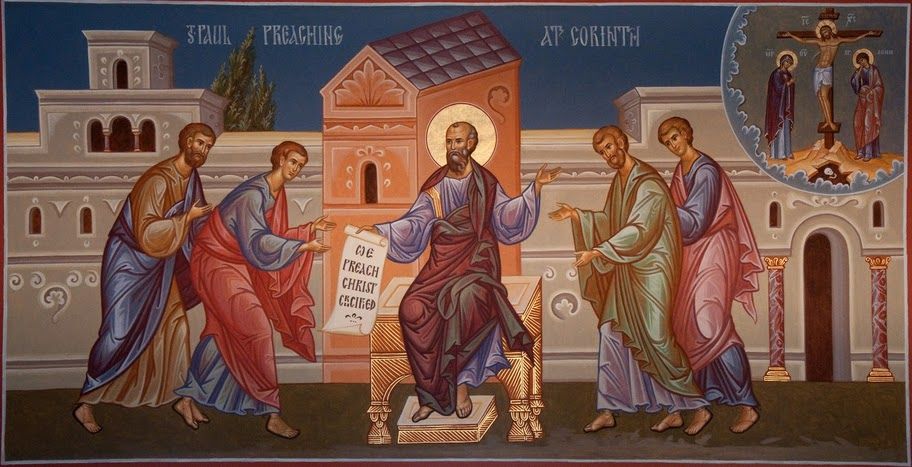 Being that I’m a member of the professional class of Christians. That is, I make my living by proclaiming the Gospel of Jesus Christ. Now, I could justify myself a bit by suggesting that I’m paid to do the work of the ministry so that I don’t need another job. In other words, my salary and benefits allow me the freedom to share in the ministry of the church without the distraction of another form of employment. I should note that there is a lot of discussion about the sustainability of full-time ministry. Of course, it’s possible to do the work of the ministry without getting paid for it, or at least not paid full-time. Paul himself is often lifted up as an example of “tent-making” ministry. There are benefits to such a ministry. You are freer to say what you think needs to be said without the fear of losing your job. That was true for Paul as well. Then again, the point of preaching the Gospel is gaining a hearing.

As we near the close of the season of Epiphany, a season that focuses on sharing the light of Christ with the world, we encounter this reading from I Corinthians 9 designated for the fifth Sunday of Epiphany. In it, we hear Paul claim that while he could have derived an income from preaching the gospel, he chose to do so free of charge. While he doesn’t charge those who hear the message, he does feel a bit of compulsion from God to preach the gospel. In this, Paul is like most prophets. They may serve reluctantly, but they serve because they can do no other. They’ve been called, and so they deliver the messages entrusted to them. Perhaps this why Paul speaks of himself as being a slave to this calling. Therefore, whatever reward he might receive is due to his ability to offer it to his listeners free of charge, even though it is within his rights to receive financial support from them.

While he may be free, he has become a slave to all so that he might win his hearers to the Gospel. He becomes all things to all people, so he can win some over to the way of Jesus. Therefore, when it comes to the Law, he may feel that he is no longer bound to live under the Law, he chooses to abide by the Law to reach those within the Jewish community who continue to abide by the Law. The reference to the weak here underscores what we read in chapter 8, regarding food restrictions. It would seem that Paul no longer feels bound by the dietary laws of Judaism, but he’ll continue to abide by them so he can win over his Jewish audience. More specifically, he is proposing a Gospel that transcends the categories prescribed by the culture—thus, slave and free, Jew and Gentile, weak and strong. The only category not mentioned in this particular passage is male and female (see Gal. 3:28). Such a message could have been perceived as challenging.

When it comes to preaching challenging messages, we need to make sure put ourselves in a position to be heard. For Paul that meant offering the message free of charge. That may not be true for us, but trust needs to be built for the message to be heard. I would guess that Paul had built at least a degree of trust in the Corinthian congregations. With this in mind, we might attend to this word from Lisa Cressman:

We want the gospel to spread to the ends of the earth, right? For that to happen, the gospel needs to be heard. If people tune out or dismiss a sermon because they feel defensive, shamed, or that we’re pushing them to pull down their beloved skies, they’re less likely to listen. They’ll tune us out, open their phones to check social media, or argue with us in their heads. Regardless, they’re not hearing the gospel. [The Gospel People Don’t Want to Hear, p. 48].

For Paul, gaining a hearing meant becoming all things to all people. That is, he embraced an adaptive form of missiology.

As he describes his methodology, Paul speaks of adapting himself to the cultural context in preaching the Gospel even if he doesn’t feel bound by that context. However, we need to be careful that we don’t simply apply to Paul modern church growth concepts. He’s not saying that the end justifies the means. This isn’t an argument for “relevance.” A close reading of this letter to the Corinthian church reveals that Paul has strong beliefs that ground his message. A better way to view this is to think in terms of embodying the message. He might have discovered certain freedoms in Christ through his proclamation of the Gospel among the Gentiles that he is willing to relinquish to remain in fellowship with Jews whom he hopes to draw into the community of Jesus.

In making his message known, Paul exchanges his freedom for the status of a slave. In the Roman world, one was either slave or free. In that congregation, some members were slaves, and some were free. Paul, though free, identifies himself with those who are slaves. Ironically, Paul takes a bit of pride in his decision to take up this lower status for the sake of the Gospel. Ultimately, however, for Paul, he preaches because he can do no other. Thus, as Charles Campbell puts it:

“Paul’s emphasis on the divine
commission to preach (vv. 16-17) theologically creates space for anyone to
proclaim the gospel when God has laid an obligation on them. Ironically, Paul
might be considered the patron saint of all those whose calling to preach has
been challenged by the church. After all, Paul’s own preaching credentials were
themselves being challenged by the Corinthians—and he defines himself, like
women have done throughout history, on the basis of his calling.”  [Belief: 1 Corinthians, p. 156].

Campbell’s reflections on Paul’s sense of calling reminds me of friends and colleagues who are women whose calling has been challenged. I think here of Aimee Semple McPherson, a powerful evangelist who launched her own denomination, though she had to overcome many barriers to fulfill her calling. Her response to her critics was that God had called her, and so she could do no other. I think of my friend Sarah Barton who wrote of her own sense of call to preach in a tradition that has kept women from the pulpit. She tells her story in her
book A Woman Called, which has inspired many women in her tradition to answer the call they’ve received. Paul makes the same claim here. He preaches because he must. By taking up this task that has been placed upon him, and adapting himself for that task, for the sake of the Gospel he preaches, therefore, he shares in its blessings.