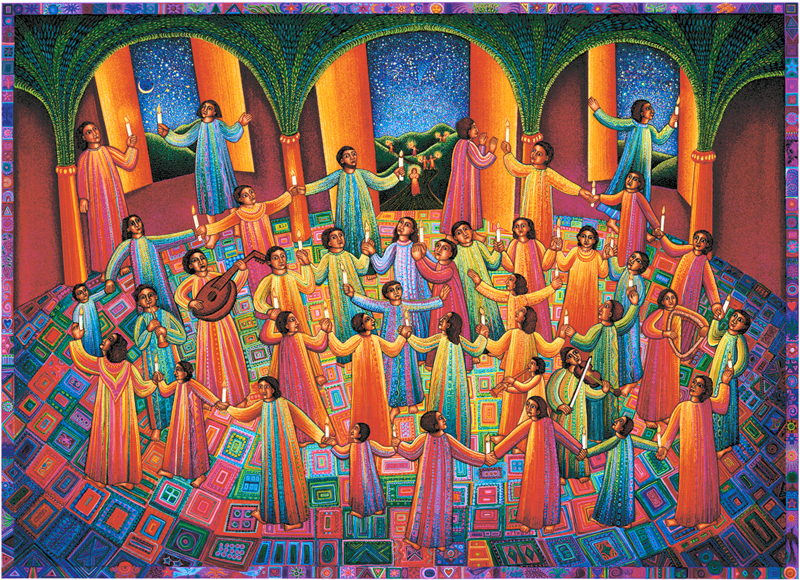 6 So we are always confident; even though we know that while we are at home in the body we are away from the Lord— 7 for we walk by faith, not by sight. 8 Yes, we do have confidence, and we would rather be away from the body and at home with the Lord. 9 So whether we are at home or away, we make it our aim to please him. 10 For all of us must appear before the judgment seat of Christ, so that each may receive recompense for what has been done in the body, whether good or evil.

[11 Therefore, knowing the fear of the Lord, we try to persuade others; but we ourselves are well known to God, and I hope that we are also well known to your consciences. 12 We are not commending ourselves to you again, but giving you an opportunity to boast about us, so that you may be able to answer those who boast in outward appearance and not in the heart. 13 For if we are beside ourselves, it is for God; if we are in our right mind, it is for you.] 14 For the love of Christ urges us on, because we are convinced that one has died for all; therefore all have died. 15 And he died for all, so that those who live might live no longer for themselves, but for him who died and was raised for them.

Paul’s declaration that “if anyone is in Christ, there is a new creation” has proven to be foundational for my faith. Although that declaration is couched in apocalyptic language, it is a comforting and encouraging word. That is because it offers a message of new beginnings. To put it in Johannine terms, it offers the promise of being “born again.” According to Paul, the old life has passed away, so it no longer has a hold on me. I know I’m not alone in reading this passage in that way. Of course, Paul did have apocalyptic expectations that did not come to fruition in his lifetime. As we see here, he assumed it would not be long before the world stood before the judgment seat of Christ (vs. 10). While the earth continues its journey around the sun and Jesus has to return to inaugurate that new creation, can we not take from this message a promise that the past does not control our present or our future.

Before we get too far in this conversation, I need to take note of the fact that the lectionary excludes verses 11-13 from our reading from 2 Corinthians 5. These excluded verses remind us that Paul is feeling the need to defend his ministry, even to the point of accepting the charge that he and his cohort are not of sound mind. While making that “admission” he clarifies by saying that if he’s not sane, it is because of his service to God. Yes, it’s God’s fault! Perhaps, the reason he has been criticized is that he hasn’t been engaged in competitive boasting. In other words, he’s not operating in ways the culture expects. That leads some to feel as if he’s weak. But, to Paul’s mind, they’ve missed the point that he’s been making. Boasting is not the way of Jesus.

Now, one can easily jump from verse 10 to verse 14 without missing a beat. Nevertheless, the missing verses do provide a context for understanding Paul’s message of reconciliation. Ultimately, the core message of the passage is that when we are in Christ we become a new creation. That old life of ours has been replaced by the new creation.

Focusing for a moment on verse 10, we read Paul’s words about standing before the judgment seat of God. That sounds ominous, and yet it would seem to be a necessary step in the process of being transformed from the old life to the new. When we stand before God our deeds are weighed and the appropriate “recompense” is given out. For Paul, if we are in Christ standing before God’s throne should not be a scary proposition. He has confidence because he walks by faith. When it comes to his situation in life, it doesn’t matter whether he is standing in the physical presence of Jesus or not, he knows what the future holds for him. So, he’s too concerned about his own bodily life, whether he’s here or there. It doesn’t matter to him. That’s because he understands himself to be living already in the realm of God.  But it appears he’s ready to leave behind this life and enter the new creation in all its fulness. He’s ready for the day of the Lord to come. The confidence comes from knowing/believing that this is his future. In the meantime, as Paul notes in verse 11, he and his cohort will continue to try to convince others of the truth he has embraced in Christ.

The confidence Paul has is rooted in the cross, believing that Jesus died for all and then raised for them as well so that those who now live might live no longer for themselves. Thus, as C.K. Barrett writes: “Because Christ, being the person he was, died and was raised, there exists the universal possibility (he died on behalf of all; all died) of a new kind of human existence, no longer centred upon self but centred upon Christ” [Barrett, The Second Epistle to the Corinthians, p. 169]. This describes Paul’s own sense of purpose. As a follower of Jesus, he has been reconciled through the cross and the resurrection, so he is committed to the ministry of reconciliation in Christ. This is his calling, and he believes it should be our calling as well.

Verse 16 is intriguing because Paul speaks of having once known Jesus according to the flesh, but no longer does he view Jesus in that way. Is he speaking of having known Jesus when he was walking the earth or is he speaking in more theological terms? That is, will he no longer look at Jesus from a purely human perspective, but instead will affirm the divinity of Jesus? Whatever Paul means here, he no longer looks at Jesus the same way as before. Here we might remember that Paul the persecutor became Paul the reconciler.

As we reach the end of the passage, we come to the verse that has spoken to me so powerfully over the years. The message of Paul is simple: “if anyone is in Christ, there is a new creation: everything old has passed away; see, everything has become new!” You can see the apocalyptic dimensions of this passage. Paul, like John the Revelator, envisioned a passing away of the old earth and the revelation of the new earth. He might not be as colorful in his language, but the message is essentially the same. What is will be replaced with what will be. The question is, what we should we do now? For Paul and for Jesus, who is also an apocalyptic prophet, we should live now as if we are already living in the new creation. Paul goes on from here to speak of a calling. Having been made new in Christ, we are called to take up the ministry of reconciliation (vs. 18). In fact, the lectionary creators likely cut things off a bit too soon. The calling to engage in the ministry of reconciliation that is rooted in the fact that we are now a new creation forms part of God’s larger work of reconciling the world to God’s self (vs. 19). Therefore, as Paul writes in verse 20, God has called us to be ambassadors through whom God is making an appeal. It’s not enough to affirm our status as a new creation if we don’t take the next step and embrace our calling to be ambassadors of reconciliation so that the work of new creation/recreation can go forward.

This calling, to live as if the new creation has already begun to take hold in this world. The transformation is underway. But, to see this occur requires faith. That is why,  as Paul writes in verse 7, we must walk by faith and not by sight. When we look around at the world in which we live, it might seem as if there is no evidence that the new creation is present in this old world of ours. It seems as if there is a mass shooting every day. Conspiracy theories are rampant, threatening the democratic foundations of the United States and other nations. Racism is rampant, taking a variety of forms. Too often Christians are deeply embedded in much of these problems. Nevertheless, Paul asks us to look at things from a different vantage point. That is, he invites us to look at the world through the lens of Christ’s promise of reconciliation. If we do this, then we can join in the effort to bring true reconciliation to the world, and with it, the new creation.