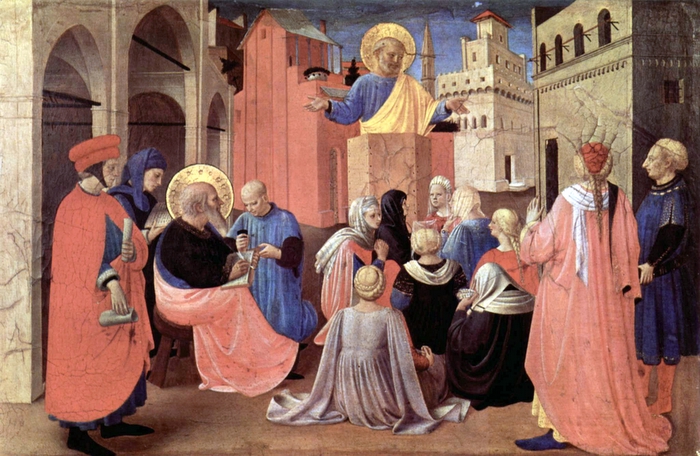 11 Now the apostles and the believers who were in Judea heard that the Gentiles had also accepted the word of God. 2 So when Peter went up to Jerusalem, the circumcised believers criticized him, 3 saying, “Why did you go to uncircumcised men and eat with them?” 4 Then Peter began to explain it to them, step by step, saying, 5 “I was in the city of Joppa praying, and in a trance I saw a vision. There was something like a large sheet coming down from heaven, being lowered by its four corners; and it came close to me. 6 As I looked at it closely I saw four-footed animals, beasts of prey, reptiles, and birds of the air. 7 I also heard a voice saying to me, ‘Get up, Peter; kill and eat.’ 8 But I replied, ‘By no means, Lord; for nothing profane or unclean has ever entered my mouth.’ 9 But a second time the voice answered from heaven, ‘What God has made clean, you must not call profane.’ 10 This happened three times; then everything was pulled up again to heaven. 11 At that very moment three men, sent to me from Caesarea, arrived at the house where we were. 12 The Spirit told me to go with them and not to make a distinction between them and us. These six brothers also accompanied me, and we entered the man’s house. 13 He told us how he had seen the angel standing in his house and saying, ‘Send to Joppa and bring Simon, who is called Peter; 14 he will give you a message by which you and your entire household will be saved.’ 15 And as I began to speak, the Holy Spirit fell upon them just as it had upon us at the beginning. 16 And I remembered the word of the Lord, how he had said, ‘John baptized with water, but you will be baptized with the Holy Spirit.’ 17 If then God gave them the same gift that he gave us when we believed in the Lord Jesus Christ, who was I that I could hinder God?” 18 When they heard this, they were silenced. And they praised God, saying, “Then God has given even to the Gentiles the repentance that leads to life.”

*******************
Who am I to hinder God? If God says something or someone is clean, then who am I to say the opposite? Of course, we do hinder God. We stand in the way of God’s vision for the world. God opens doors and we slam them shut. God opens up the table to those who are not of our community and we set up fences. Despite this intransigence, sometimes God gets our attention, and we discover a different path—one that brings blessings rather than curses, healing rather than wounds.
Peter had a vision. It had to do with appropriate dietary concerns. In this vision, which is first described in Acts 10, Peter is on the roof praying. It’s near lunchtime. He’s probably hungry. A sheet is lowered from the heavens. It’s filled with food items that he is prohibited from partaking. He hears the command to “kill and eat.” Peter responds, with deep piety, “no, I can’t eat these things. They’re unclean. Nothing profane or unclean has ever entered my mouth.” The response from heaven is clear and concise, though it is repeated three times (just to make sure Peter gets the point): “What God has made clean, you must not call profane.” Then there was a knock at the door.
When it comes to dietary restrictions, there’s nothing wrong with them. Judaism has them. Islam has them. So do other religious traditions. They often serve as boundary markers, helping define a community’s existence. Christianity may not have many food restrictions (if any), but we have our ways of defining ourselves. But what if God wishes to open things up a bit. Are we ready for it? Of course, the stories of Acts 10 and 11 aren’t really about eating shellfish, crustaceans, and reptiles. I don’t know whether Peter added lobster to his menu, but he was soon to learn a more important lesson that had to do with those whom God was ready to welcome into the realm of God and on what basis.
That vision led to Peter going to the home of Cornelius, a Roman soldier and a Gentile. He had connected the dots between the vision and the knock on the door and went with the three representatives of Cornelius while taking along with him six of his own companions. When he arrives at the home of Cornelius, Peter preaches. As he is preaching, the Holy Spirit falls on Cornelius and his household, as demonstrated by the sign of speaking in tongues, just as occurred on the day of Pentecost. Since this enduement of the Spirit occurs while Peter is preaching, what is Peter going to do? He does the only thing he could do; he baptizes them and welcomes them into the church. You can read the full story in Acts 10.
The story we read in Acts 11 is a summary report of the events that took place in Joppa and then at the home of Cornelius. Peter recounts the story that begins in Joppa, where Peter was residing after the church was scattered by Paul’s persecution of the church. Not everyone fled Jerusalem, which remains headquarters. Peter is summoned back to Jerusalem so he can explain himself. More specifically, it is the circumcision party that is demanding answers. On whose authority had he gone to the home of Cornelius? Why did he baptize them? It’s not that they opposed Gentiles joining the community, but there were hoops to be jumped through before you get to baptism. That is, you have to be made clean before you get the final seal of approval (baptism), and that included affirming Jewish dietary rules and the circumcision of males, at least that seems to be the case here. These questions shouldn’t surprise Peter since he needed a sign from heaven before he traveled to Cornelius’ home. This story serves as a reminder that up to this point, the church remained a sect of Judaism that followed the teachings of Jesus. There were, of course, the Samaritans, but they were essentially estranged members of the family. They were more easily accepted. Now that Peter had gone to Cornelius’ house and baptized them, another boundary marker was being crossed.
So, Peter recounts the story of his vision and the encounter with Cornelius. He makes the point that he remembered the word of the Lord: “John baptized with water, but you will be baptized with the Holy Spirit.” In this case, Cornelius and his household had been baptized with the Holy Spirit, and so the water was simply a confirmation of what God had already done. With that, Peter’s response was simple: “who was I that I could hinder God?” How do you respond to that? If God is for it, then how can you be against it? Gary Charles takes note of this question, writing:

That question assumes that God is at work in the world to bring about God’s purposes. Though religious tradition plays an essential role, it does not restrict God from building upon and even moving beyond tradition. Another key assumption in the question is that God is still at work, and God’s purpose often extends far beyond the horizon of longstanding tradition. [Joel B. Green, Thomas G. Long, Luke A. Powery & Cynthia L. Rigby. Connections: A Lectionary Commentary forPreaching and Worship: 2 (Kindle Locations 7895-7897). Presbyterian Publishing. Kindle Edition.]

If God is still at work and is able and willing to go beyond tradition, then who are we to hinder that work? Of course, we can’t go willy-nilly throwing off traditions just for the sake of throwing off traditions. It takes discernment, itself a gift of the Spirit, to know when to hold them or fold them. The Spirit bore witness in this case by providing a sign that demonstrated to Peter that he could baptize them, and apparently, from the accusations against him, he ate with them as well. If he ate with them, then he ate what they ate. Everything was now clean.
There is a piece of the puzzle that can be easily missed, but which is important. Peter notes that “these six brothers also accompanied me.” Peter didn’t go to Cornelius’ house alone. He took six companions. The folks in Jerusalem didn’t have to take his word alone. He had confirmation, maybe not of the vision, but of the actions on the part of the Holy Spirit. They could bear witness to the fact that the Holy Spirit fell on the household of Cornelius. They observed the filling of the people with the Spirit, which included speaking in tongues, just as on the day of Pentecost. They could back up Peter’s story, just in case members of the Jerusalem community had their doubts about Peter’s veracity.
So, where is God showing offering visions of a new way of being the church? What boundaries are being crossed by the Spirit? Women have looked to this story as evidence that cultural mores that limited their place in the church have been set aside. More recently those of us who have come to a realization that the barriers to inclusion of LGBTQ persons need to be lifted have found encouragement from this set of stories. If the Holy Spirit is at work in their lives, who are we who are straight to get in the way of God?  Who else might be standing on the outside of our communities, that God would want us to embrace?
In the case of the critics of Peter’s actions, according to Luke, they were brought to silence. After all, who was he to hinder God? With that, the critics had no response, as it was clear that God had welcomed these Gentiles (and those who followed) into the fold. With this understanding, they all rejoiced.