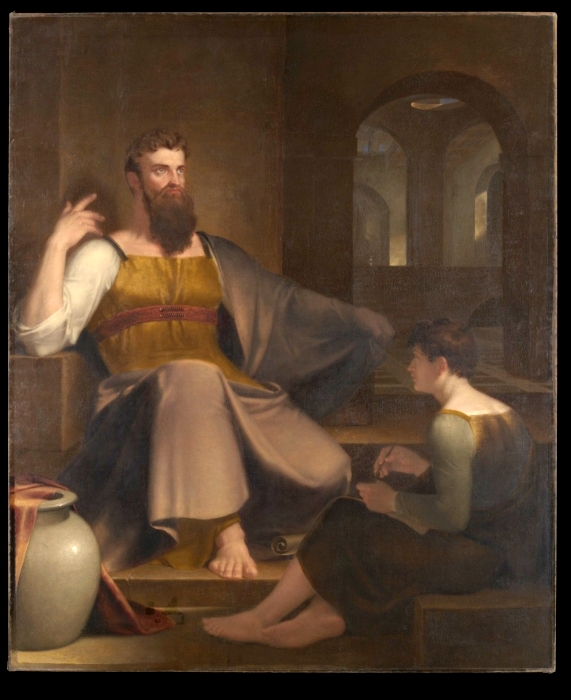 32 The word that came to Jeremiah from the Lord in the tenth year of King Zedekiah of Judah, which was the eighteenth year of Nebuchadrezzar. 2 At that time the army of the king of Babylon was besieging Jerusalem, and the prophet Jeremiah was confined in the court of the guard that was in the palace of the king of Judah, 3 where King Zedekiah of Judah had confined him.

9 And I bought the field at Anathoth from my cousin Hanamel, and weighed out the money to him, seventeen shekels of silver. 10 I signed the deed, sealed it, got witnesses, and weighed the money on scales. 11 Then I took the sealed deed of purchase, containing the terms and conditions, and the open copy; 12 and I gave the deed of purchase to Baruch son of Neriah son of Mahseiah, in the presence of my cousin Hanamel, in the presence of the witnesses who signed the deed of purchase, and in the presence of all the Judeans who were sitting in the court of the guard. 13 In their presence I charged Baruch, saying, 14 Thus says the Lord of hosts, the God of Israel: Take these deeds, both this sealed deed of purchase and this open deed, and put them in an earthenware jar, in order that they may last for a long time. 15 For thus says the Lord of hosts, the God of Israel: Houses and fields and vineyards shall again be bought in this land.

At first glance, this is an odd text. Preachers will wonder what to do with it. We know the context. Jeremiah is essentially in jail at the request of the king, Zedekiah, the last of the kings of Judah. He was himself placed on the throne by Nebuchadnezzar, who according to Jeremiah 32 is besieging Jerusalem. That is because Zedekiah had rebelled against the Babylonian ruler (2 Kings 25:1). In fact, according to 2 Kings 25:1ff., Zedekiah had his eyes put out before being taken to Babylon in chains. It was after Zedekiah’s fall that the city and the Temple were destroyed. At this point in the story of Jeremiah, Zedekiah was still “ruling” but in rebellion. Jeremiah had warned him that things would not work out well for him. In the passage omitted by the lectionary creators, Zedekiah is told that he shall be taken to Babylon. His rebellion will not succeed (vs. 4-5). That is the setting for our passage designated for the first reading for the Sixteenth Sunday after Pentecost (Year C). So, what would a preacher do with a text like this?

We are told that Jeremiah received a word from the Lord, and this word involved a person named Hanamel, the son of Shallum, who apparently is Jeremiah’s uncle. Hanamel will come to Jeremiah and offer him a piece of land in Anathoth because Jeremiah is next in line to purchase the property. That is, he has first right of refusal. Just like the Lord had said to Jeremiah, Hanamel came to him with the proposition to buy the land. Now, remember, Jeremiah is currently in custody and Nebuchadnezzar’s troops are at the gate. Hanamel is a bit insistent, it would seem. He suggests that Jeremiah has a duty to purchase the land (assumedly to keep it in the family). Jeremiah recounts that when he heard this, he knew it was a word from the Lord.

Jeremiah purchases the property for seventeen shekels of silver. This is a prophetic action. It’s meaning will be revealed shortly, but Jeremiah takes it as a sign from God. It might seem odd to us—it may have seemed odd at first to Jeremiah—but it was a prophetic sign and Jeremiah couldn’t say no. Thus, he purchased the land. He took the deed and gave it to his assistant Baruch in the presence of Hanamel, who was one of the witnesses to the deed. It seems so run-of-the-mill. How is it prophetic?

The answer comes in the instructions given to Baruch. Jeremiah told him to go and place the sealed deed in an earthen jar so they might be preserved over time. They needed to last a long time. Why? Because it would be a while before things got better for Judah. Yet, there is a word of hope here: “For thus said the Lord of Hosts, the God of Israel: “Houses, fields, and vineyards shall again be purchased in this land.” (Jer. 32:15). That is it. This is the promise of this passage. It alone makes some sense of the story.

There are times when the future looks dark. I recently read a biography of Franklin Roosevelt. As President, he faced difficult times (and I’m not talking about World War II). He became President as the country was mired in the Great Depression. While he created a variety of programs to put people back to work, most important was giving the people a sense of hope for the future. You can imagine the fear that permeated the land. FDR had a different position in the world than did Jeremiah, but Jeremiah wanted to give the people a sense of hope for the future. Buying a piece of land from a family member, and then placing the deed in an earthen jar that would preserve it, served as a sign that as bad as things might be at the moment, there will come a time when things will get better. People will again buy land. This piece of property, which I’m assuming Jeremiah didn’t live to see bear fruit, was just that sign of hope for the exiles in Babylon and those living in the besieged city.

We should note that this word of the Lord follows the one in Jeremiah 31:31-34 that speaks of a new covenant. This is but one more reminder that God will fulfill the promise of a new covenant, a time when the people will be restored to the land. Still, what word do we hear in the world in which we live?

I was flying home from Europe. We passed over Greenland—just the southern tip, but enough to get a sense of the land. I saw lakes and the ice sheet. I wondered, are these lakes the result of climate change. Will Greenland’s ice sheet turn into a great lake? Or is this just the natural order of things. I don’t really know, but it did make me think about the future of our planet. Should we purchase land for our descendants? Is there any hope? When it comes to climate change and the warming of the planet, there are grave concerns. Is it too late? Have we reached the point of no return? Should we purchase that piece of property, so it stays in the family for future generations?

Jeremiah’s word of hope is given to exiles. They will return home someday. They will have the opportunity to again buy property in the land of their ancestors. But, remember that the jar must last a long time. It will be some time before things return to their previous state. But there is hope! Leonora Tubbs Tisdale notes that “it is often easier in prophetic witness to criticize the old order than it is to come up with creative avenues for purchasing and planting fields of hope in the very communities where we live and work. Jeremiah calls us to do both—even if our hope-filled acts seem absolutely foolish to the rest of the world.” [Connections, p. 340].

So, what prophetic actions might we take as signs of hope in our time? How might we embody hope for the future? What might be our down payment?

Allston, Washington, 1779-1843. Jeremiah Dictating His Prophecy of the Destruction of Jerusalem to Baruch the Scribe, from Art in the Christian Tradition, a project of the Vanderbilt Divinity Library, Nashville, TN. http://diglib.library.vanderbilt.edu/act-imagelink.pl?RC=55713 [retrieved September 23, 2019]. Original source: http://commons.wikimedia.org/wiki/File:Jeremiah_Dictating_His_Prophecy_by_Washington_Allston_1820.jpeg.
Advertisement