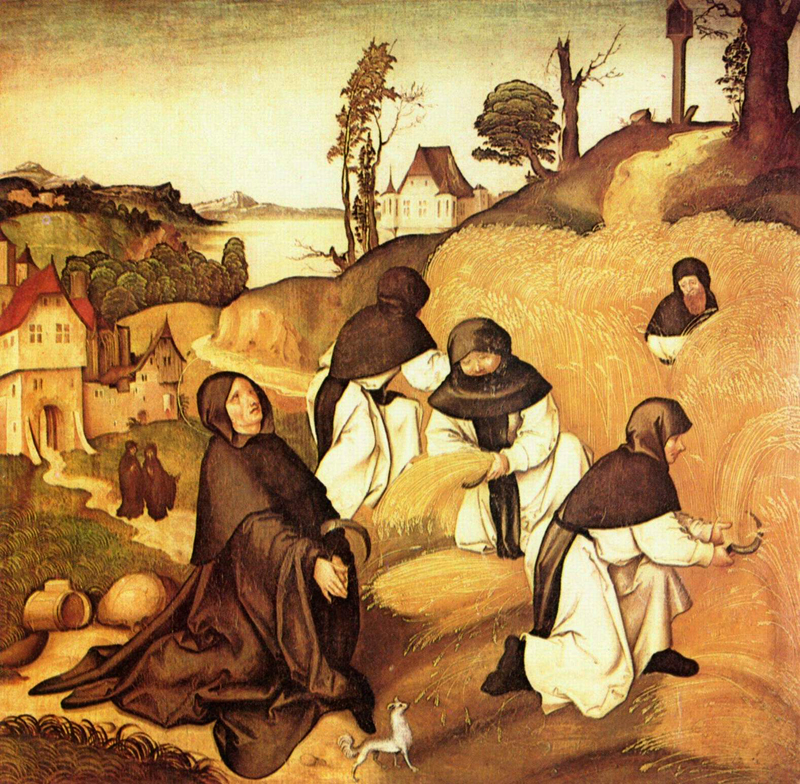 3 I thank my God every time I remember you, 4 constantly praying with joy in every one of my prayers for all of you, 5 because of your sharing in the gospel from the first day until now. 6 I am confident of this, that the one who began a good work among you will bring it to completion by the day of Jesus Christ. 7 It is right for me to think this way about all of you, because you hold me in your heart, for all of you share in God’s grace with me, both in my imprisonment and in the defense and confirmation of the gospel. 8 For God is my witness, how I long for all of you with the compassion of Christ Jesus. 9 And this is my prayer, that your love may overflow more and more with knowledge and full insight 10 to help you to determine what is best, so that in the day of Christ you may be pure and blameless, 11 having produced the harvest of righteousness that comes through Jesus Christ for the glory and praise of God.

We turn on the Second Sunday of Advent to the first of two readings from Paul’s letter to the Philippians. According to the Advent candle lighting schedule, we’re due to light the candle of peace. While nothing is mentioned here about peace, it would seem that peace is the natural extension of a life filled with love and righteousness. These words come from the opening paragraph that follows Paul’s greeting.

Paul writes this letter from prison (vs. 7) to a church that likely was predominantly gentile. In the Book of Acts, when Paul visits Philippi, he finds a group of women led by Lydia who gathered down by the riverbank since there were not enough Jewish men to constitute a synagogue. When Lydia heard Paul’s message, she and her household were baptized. Of course, this is also a city where Paul and his companion Silas were imprisoned after they delivered a slave-girl from a spirit of divination, costing her master money. After experiencing a beating, the imprisoned missionaries sang hymns until an earthquake freed them—though they didn’t flee. Instead, they waited until they could stand before the magistrate and reveal that they were citizens of the empire and thus they should never have been treated in this way. Of course, in the midst of all this, the jailer and his household were baptized. Thus, this is the first church in Philippi that was composed of Lydia and her household—as well as the jailer and his household ( Acts 16:11-40). Could it be that the congregation to whom he wrote this letter was led primarily by women, and Lydia in particular? It’s quite possible and worth imagining!

In these opening lines, Paul gives thanks for the Philippian believers in his prayers. This brings him joy, despite being in prison. He is grateful because they have been partners with him in the gospel from the beginning. The NRSV uses the word sharing here, but Ron Allen and Clark Williamson suggest that the Greek word koinonia here is best translated as partnership rather than fellowship or even sharing, for Paul is grateful that the Philippians are his partners in pursuit of this common goal. Allen and Williamson write that the “Philippian Christians are partners in Paul’s imprisonment. The congregation contributes prayers, faithfulness, financial resources, and their witness in Philippi. Paul is thankful that the Philippians are reliable partners.” [Preaching the Letters without Dismissing the Law, p. 183]. His prayers of gratitude are rooted in his confidence in the one who will bring to completion the good work begun in them by God, a good work that will be completed by the Day of the Lord. It is that phrase, “the day of Jesus Christ,” that gives the passage its eschatological foundation. What follows is offered in relation to that expectation.

Although he was once again imprisoned, this doesn’t take away his joy at the relationship that existed between himself and this congregation. It’s just something that went with his calling to preach the gospel. As for the nature and location and timing of Paul’s imprisonment, there’s no scholarly consensus. Suggestions range from his later imprisonment in Rome to earlier imprisonments in Ephesus or Caesarea. He writes to encourage them in case he ends up being put to death. If this is his fate, he is comfortable with it because it is due to his service to Christ. But for their sake, he wishes to live so he can come to them once again (Phil. 1:19-26).

The Advent season speaks of preparation. We’re called on to be alert and to be prepared. The reading from Malachi promises a messenger who will prepare the way for the coming of God. Like refiner’s fire and fuller’s soap, the descendants of Levi will be purified so that offerings pleasing to God can be offered (Mal. 3:1-4). The Gospel of Luke points to the ministry of John the Baptist and draws on the words of Isaiah to signal John’s ministry of preparation. He is the voice crying in the wilderness “Prepare the way of the Lord” (Luke 3:1-6). Here, Paul writes a word of encouragement, in the hope that on the day of the Lord they will be “pure and blameless.” That is, Paul prays that they will have experienced the refiner’s fire, so they’ll be ready to welcome the coming of the Lord.

With the apocalyptic note to this opening paragraph, we learn that Paul’s goal here is bringing in a “harvest of righteousness that comes through Jesus Christ for the glory and praise of God.” This is more than bringing in a harvest of souls, but more importantly the expectation that this work in Philippi would lead to the creation and sustaining presence of a community that is ethical so that God would be glorified.  Carla Works offers this vision of what Paul has in mind here: “God will destroy anti-God powers and enemies (1:28; 3:18-19). The ‘harvest of justice’ or the ‘fruit of righteousness is in the hands of the real King (1:11). Paul hopes that the church will see the current situation through this larger picture of what God is doing to rectify the world” [Working Preacher].

Together as partners in ministry, Paul and the Philippian church, proclaim a gospel that will lead to a harvest of righteousness. That is, it leads to the emergence of the new creation at the coming of the Lord. While apocalyptic messages can be problematic when the focus is on God’s wrath. But that doesn’t appear to be the case here.  Paul simply wants the church to keep its focus on the things of God so that they can participate in the work of God in the world. That work leads to justice/righteousness. Because of this partnership, Paul experiences joy despite his current situation—wherever he is currently imprisoned.